The PIC is a non-profit foundation that is an information and education center about sex work in the Red Light District of Amsterdam. It was set up in 1994 by former sex worker Mariska Majoor.

While she enjoyed her work behind the window, the public stigma increasingly bothered her and she decided to do something about it. At the PIC, Mariska tirelessly responded to questions about sex work, gave hundreds of interviews with media and influenced local politics when she could. She developed her own unique walking tour of the Red Light area.

In 2017, she was knighted by the late Mayor of Amsterdam for her contribution to sex workers’ rights over the past 20 years. In 2016, Mariska retired from the PIC and a committed team of sex workers and allies continues to run it in her legacy.

More than 300 000 people have already visited the PIC. We hope to see you soon! 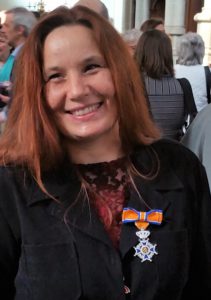 Read here for an extensive interview with Mariska